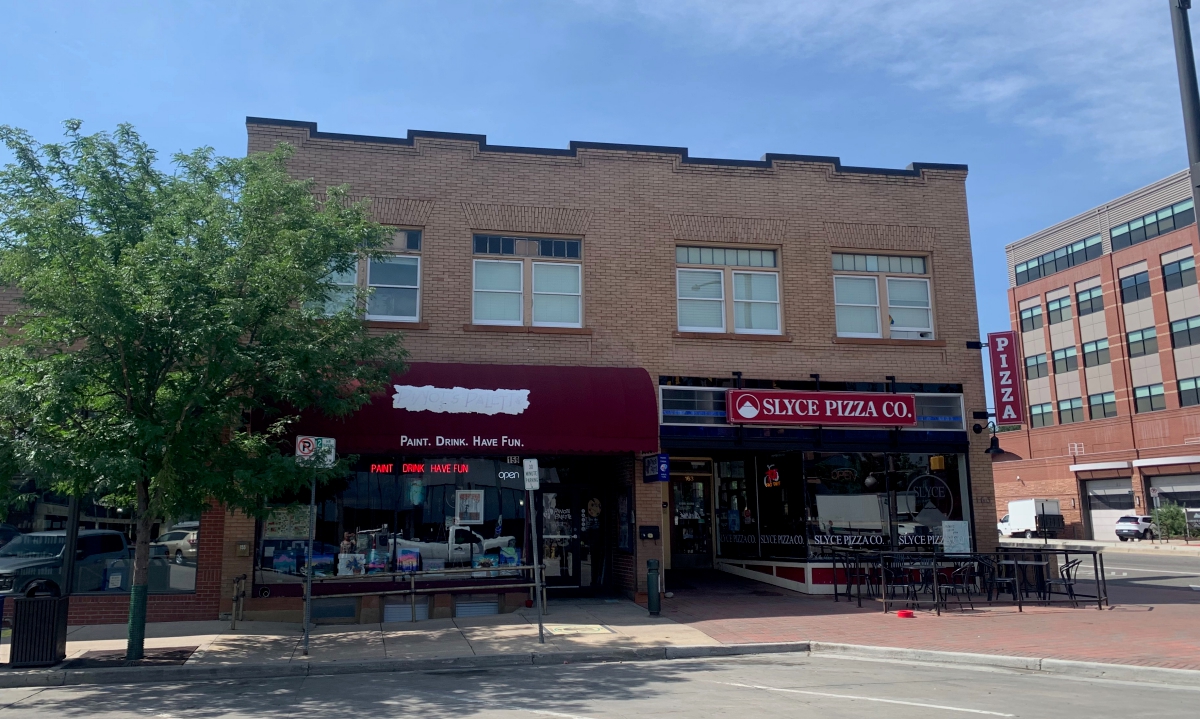 The McCormick Express Building as it looked on July 26, 2022. Photo by Meg Dunn.

Agricultural Hotel: Built 1873. The Auntie Stone cabin was hauled to this location and installed behind the hotel.

Agricultural hotel was renamed Commercial hotel and removed from this lot in 1878 and hauled over to the southeast corner of Walnut and N. College Ave.

Auntie Stone Cabin: The cabin remained on the site until 1909, when it was moved south on Mason Street.

The Agricultural Hotel / The Commercial Hotel

The first mention I’ve been able to find in the newspapers of Marcus Coon and Alonzo Scranton’s Agricultural Hotel is from the March 11, 1874 Fort Collins Standard. The ad looks much like the one at right and states that the hotel “was built last season” by which I would assume it means that the hotel was built in 1873. An article from 1913 gives an explanation as to the circumstances around the construction of the hotel.

“When the new town was laid out in 1872, a drawing of lots was had and Marcus Coon secured the lots at the corner of Mountain avenue and Mason street, now occupied by the Express building. On this site Coon and Scranton built, in 1873, the Agricultural hotel, a frame building to the rear of which was attached the Auntie Stone log cabin for use as a kitchen and laundry. Captain Coon was prominent in the early days and was elected sheriff of the county in 1876. He removed to the Western slope in 1885. In 1877 Captain Coon sold his hotel to Mr. David M. Harris, an Englishman, who had come to Fort Collins in 1873 from Kansas. Mr . Harris ‘reopened’ the hotel on February 22, 1878. In January, 1879, the Courier observed The Commercial hotel ( note the change in the name), which sits near the crossing of the C. C. R. R. and Mountain avenue, was refitted and enlarged in 1878 at a cost of $2,500. In 1879 Mr . Harris moved the Commercial to the triangular lot at the junction of College avenue and Walnut street, now adorned by the Northern, but the Auntie Stone cabin was left behind, to be rescued from destruction many years later by the patriotic pioneer women of the city.” (“Early Hostelries,” by E. H. H. under a column entitled “Pioneer Reminiscences” in The Weekly Courier, January 31, 1913.)

The Agricultural Hotel was built on the southeast corner of W. Mountain Avenue and Mason Street. It was originally a two-story wood structure built and operated by Captain Marcos Coon and Alonzo Scranton, with Mrs. Coon running the kitchen. Auntie Stone’s cabin was hauled over and used as a laundry and kitchen for the hotel. (Fort Collins Express, May 20, 1923.)

According to multiple newspaper ads from the same time period, Dr. Just a second. S. Harlow, Physician and Surgeon, maintained his office at the Agricultural Hotel. (See page 1 of the Fort Collins Express on March 11, 1874 for an example.)

“Agricultural Hotel. D M. HARRIS, Proprietor. Re-opened February 22d, 1878. This House has been newly furnished throughout and is a first class hotel in every particular. The table is supplied with the best the market affords, and no pains will be spared to make all our guests feel thoroughly at home. Terms low. Mountain Avenue, at C. C. R. R. crossing. FORT COLLINS, COLO.” (Fort Collins Courier, September 28, 1878)

Harris changed the name of the hotel by October 1878, as guests visiting the hotel were listed as being at the Commercial in the October 19, 1878 Fort Collins Courier.

“The Commercial Hotel, situated near the crossing of the C. C. R. R. and Mountain Ave., has been entirely refitted and greatly enlarged during the past year. Stables have been added and the building well painted. The bed rooms have been refurnished with elegant suits, and good spring beds. The entire improvement has cost Mr. Harris, the genial landlord, about $2500. The Commercial is now a first class hotel and well managed.” (Fort Collins Courier, January 4, 1879)

Harris was apparently in the middle of adding a sizable addition to the hotel when a wind storm blew the whole thing down.

“Just as we go to press this–Friday–morning, the wind which commenced rising about 9 o’clock, and which is now blowing a perfect gale, has taken the roof and eight or ten feet of the upper front walls of Welch’s brick block clean off; the new barber shop and the frame of the addition to the Commercial hotel are blown down; chimnies are being broken off, and other damage done to buildings throughout town. We are unable to get out to obtain an estimate of the damages at this time, but they will amount to considerable. So far as we can learn no persons have been injured. The Courier office is rocking so in the wind that the printers complain of being sea-sick.” (Fort Collins Courier, March 20, 1879)

To follow the rest of the story of the Commercial Hotel, see The Northern Hotel.

“Plans are in course of preparation for a fine printing office building for our contemporary, the Express. The new building will be one story high and 25 by 85 feet on the ground, and will be located on the southeast corner of Mountain avenue and Mason street, where the old Commercial hotel once stood. The new building will be modern in all respects and will furnish an elegant home for the Express.” (Fort Collins Courier, June 19, 1907)

“The cabin Mrs. Stone built was the first house erected in Fort Collins and it was used as a mess house for the officers while the soldiers were here in 1864-5-6. It stood where the City hotel on Jefferson street now stands. Later it was moved to the corner of W. Mountain avenue and Mason street and became a part of Agricultural hall, then a somewhat pretentious hotel. When a part of this hotel was moved to the present site of the Northern hotel and rechristened the Commercial hotel, the “Aunty” Stone cabin was left behind and is still in a good state of preservation.” (The Weekly Courier, April 21, 1909)