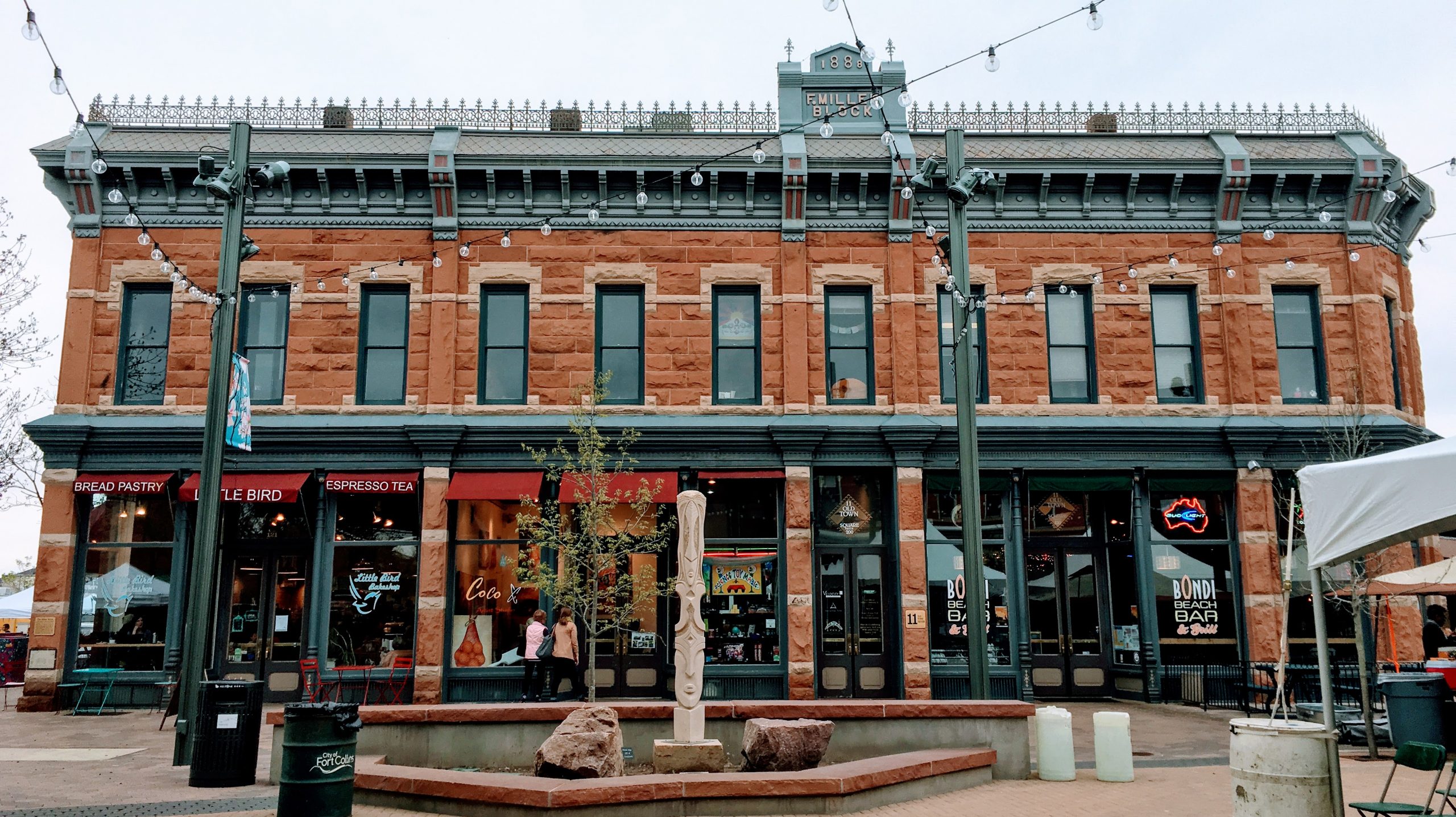 The Miller Block as it looked in 2021. Photo by Meg Dunn.

Frank Miller on Tuesday, through Howard & Emigh, bought lots 18, 19 and 21, block 19, of C. G. Buckingham of Boulder, consideration $3,000. Mr. Miller now owns that entire part of block 19 bounded by Linden and Walnut streets and the alley in front of Justice Fitnam’s office, and valuable property it is, too.” (The Fort Collins Express, December 17, 1887)

“Frank Miller contemplates erecting a handsome stone front business block on his newly acquired property, Linden and Walnut Streets. Frank is one of our most progressive citizens. He has an abounding faith in the future of Fort Collins and is laying the foundation for a big fortune in real estate.” (The Fort Collins Express, December 17, 1887)

“Frank Miller is making arrangements for commencing the erection of his new business block on Linden street.” (___, February 4, 1888)

“Alderman Frank Miller is thoroughly overhauling his fine sample room in the Miller block on Linden Street, preparatory to a grand opening. Mr. Miller is making all preparations for a free lunch on the opening day for the entertainment of his host and friends. No wholesome and retail liquor establishment in northern Colorado carries a better or finer stock of wines and liquors for medicinal purposes than does Mr. Miller.” (Fort Collins Coloradoan, 26 June 1964, which was quoting the 1894 Fort Collins Express)

“Frank Miller is making arrangements to extend his redstone block thirty-five feet further south . The new part will be built of redstone to correspond with that already constructed. This will give him a frontage of 85 feet on Linden street. C. C. Emigh, who occupied the small frame next to the Miller block, has moved his office into the Secord building next to the bakery, and his old office will be removed to give room for the new building.”(Fort Collins Courier, April 2, 1891)

“An important business change took place on this (Thursday) morning, when Mr. C. E. Crittenden sold his interest in the stock, fixtures and good will of the Fair to Mr. Frank Miller. The new firm will be known as Miller & Black, and the stock of goods will be moved next week into the large store room in the Miller block.” (Fort Collins Courier, October 14, 1897)

“The Fair has moved into the Miller block where it has elegant quarters.” (Fort Collins Courier, October 21, 1897)

The upstairs of the Miller block appears to have been used primarily by doctors, lawyers, and specialists.

Mr. Sperr moved his harness shop into the building. (The Weekly Courier, September 6, 1900) It’s unclear if he shared space on the first floor with the Fair or if he used some other part of the building. [This must be the Robert Miller block on N. College.  I’ll move this reference once I start a page for that lot.)

“The Miller block is being brightened up with a fresh coat of paint.” (The Weekly Courier, June 11, 1902)

“The Fair is nicely settled in the north store of the Miller block at 162 Linden street. They have the most complete line of general merchandise in the city at the lowest prices.” (The Weekly Courier, September 16, 1903) [This implies that perhaps the store filled the entire first floor of the building, or perhaps the northernmost and middle parts of the first floor, before moving into just the northern portion.]

“The Roberts Tea and Coffee company will open for business some time this week in the corner room of the Miller block. The room is being repapered and fitted up expressly for the use of this company whose manager is William V. Roberts, late postmaster.” (The Weekly Courier, May 31, 1905)

“Some of the Fort Collins buildings in which the local red sandstone has been used either for trimming or for the entire structure, are the Miller block, put up twenty years ago and today as good as the day it was finished; the chemical building and agricultural hall at the college; the Carnegie library and the Laurel street school.” (The Weekly Courier, May 26, 1910)

Van’s Electric Shoe Shop was in the building. 1927.

“SMOULDERING BEDDING CAUSES FIRE ALARM
City firemen late Friday night made a run to the Miller Block apartments at 156 Linden Street, where a fire was reported on the second floor. The fire turned out to be a smoldering mattress and bedding where Jess Charlton had gone to sleep while smoking in bed. Only slight damage was reported.” (Fort Collins Coloradoan, 18 March 1962)

The Green Onion was in the Miller Block by 22 February 1970 according a  Coloradoan article on historic buildings downtown. 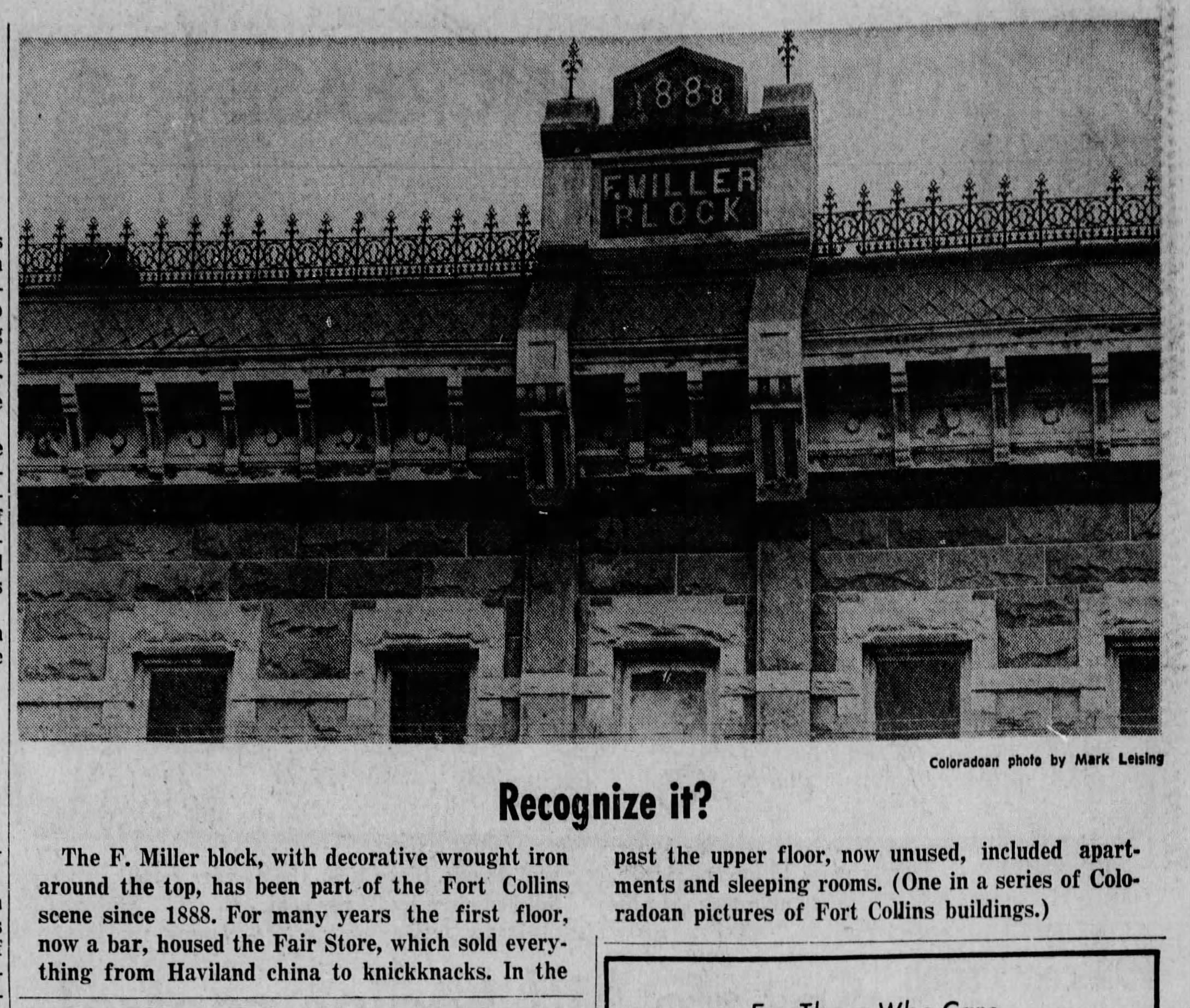 “MILLER BLOCK (162 Linden Street) — The finest building in Fort Collins is what they called this structure when it was built in 1888 by Frank Miller. The building housed several stores, including MIller’s own liquor business. When Miller died, the building was taken over by his son Frank Jr. — a Western showman, marksman, artist, and owner of such unusual pets as bears and a bald eagled named Uncle Sam. The younger Miller and D. C. Armitage established The Fair Store, an early department store, in the building.” (Fort Collins Coloradoan, 4 July 1976)

“‘The Fair: Prices the Lowest’ is a sign still visible on the back of the Miller ‘Block’ at 162 Linden Street. You find the old sign when you go to the back of the building from Walnut Street. Below the Fair sign are two others — one for tobacco and one for a hard or soft beverage, but all you can distinguish now are the words ‘drink’ and ‘smoke.’ The 1909-10 city directory lists ‘The Fair Store, variety and notion store 162 Linden; D. C. Armitage and F. C. Miller, proprietors.’ And advertisement for the store in the same directory says ‘Queensware, glassware, granite and hardware, stationery, toys, school supplies. Prices the lowest.’ By 1936 only Dewitt C. Armitage’s name is listed for the Fair and the merchandise was described as ‘notions.’ There is no listing for the store in the 1948 directory. One Fort Collins native, now about 80, remember Ruth Armitage as a childhood friend. Ruth was a daughter of the proprietor of the Fair. The woman I contacted thought that Dwight Armitage has ‘one of those long, droopy mustaches.’” (Fort Collins Coloradoan, 4 August 1976) 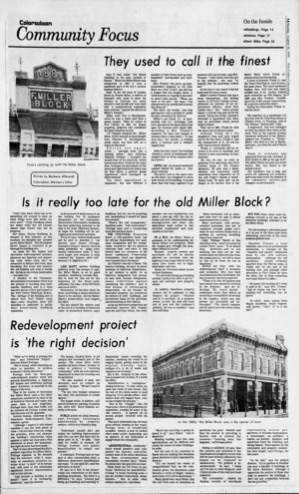 Excerpts from the articles at left:

“Built in the 100 block of Linden Street by Frank Miller, a native of Denmark who came to seek his fortunes in Colorado, the stone structure cost $12,000 and was built with a comparatively expensive stone exterior (against the advice of Miller’s friends). …  J.F. Colpitts designed the Miller Block, which was put on land bought from Charles G. Buckingham, whose name has been left as a legacy in this area.  …  The store, she [Charlene Tresner] recalls, was long and narrow, with a myriad of goods for sale crowded on its shelves.  …  According to Mrs. Tresner’s research, the block also housed at various times a shoe store (‘It was very tiny,’ she recalls), a clothing store, a hatchery and a radiator repair shop.  …  After the store closed, the building housed a variety of businesses that ranged from an Army surplus store to a tavern.”

Mrs. Gus Carter was the owner of the F. Miller Block at the time of the writing of the article.

“‘Don’t they know there has to be something left around to show us what things were like before we were born?’ Cindy Sundberg asked her father when the old Lincoln Junior High School was lost to progress. Her father, Wayne Sundberg, is steeped in that concern. At the moment, his energies are focused on the Miller Block. The Remington Street bypass is scheduled to go through the building site. As plans for the bypass and downtown redevelopment proceed, planners are figuring and projecting costs. Some costs can’t be measured in dollars and cents, says Sundberg. For those who treasure the old building and what it stands for, its loss is concretely inestimable— but quite real.”

“‘What we’re doing is pruning the tree,’ says Downtown Project director Robert Ferluga. ‘We’re trying, while disturbing as little as possible, to achieve economic vitality downtown.’ Ferluga feels the three-part redevelopment project, which will provide beautification, a Highway 287 bypass and additional parking space downtown, is essential to the future of the area. That in the course of renovation the Miller Block (and a few other structures considered by some to be of historical interest and value) will come down is less important, Ferluga feels, than that traffic will be rerouted off College Avenue and that the area will be upgraded.”