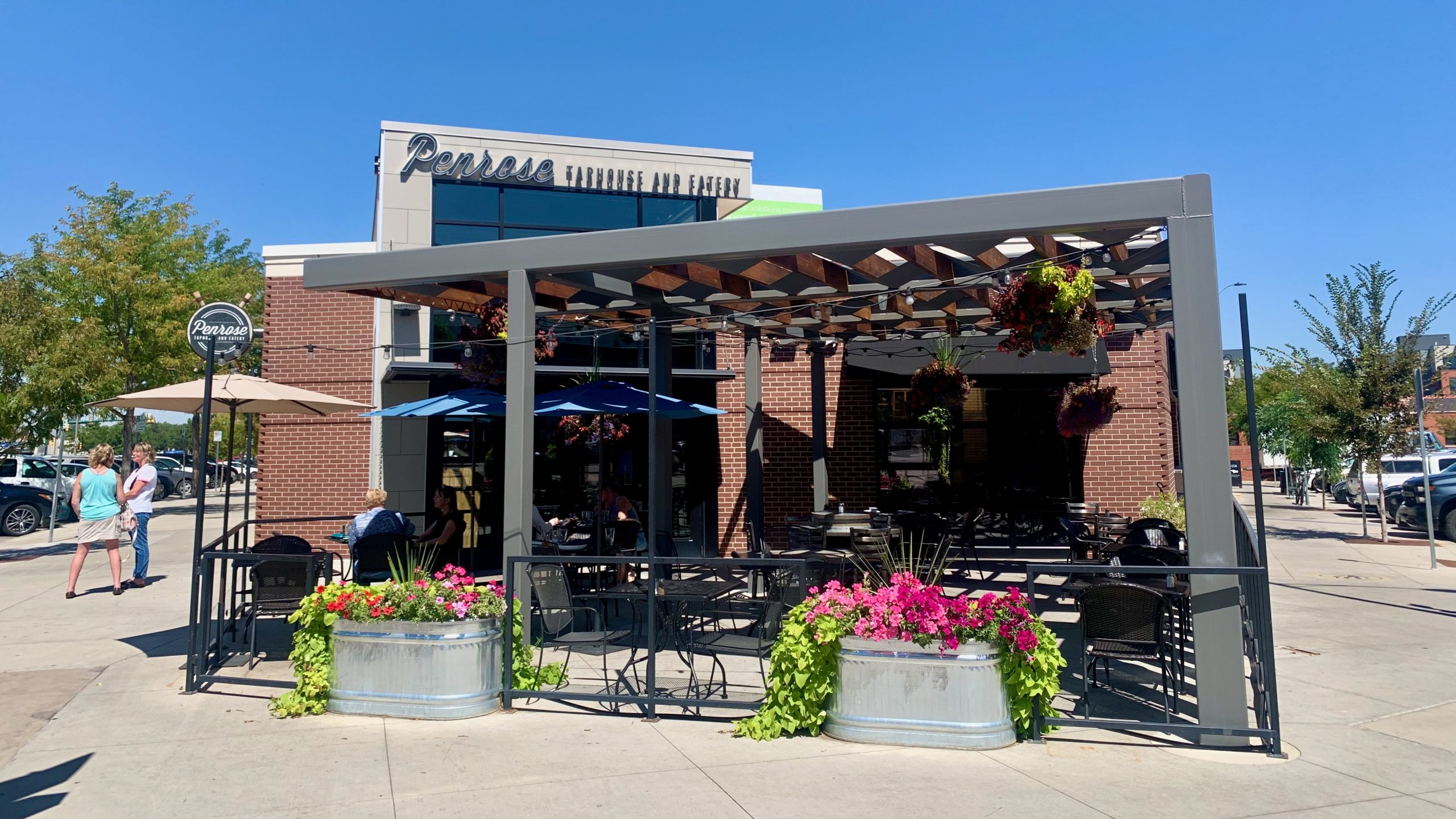 Penrose Taphouse and Eatery opened up during the midst of the COVID pandemic in June 2020. (Photo by Meg Dunn, taken 30 Aug 2022.)

Conley’s Carpenter’s Shop: (? – 1900) M. G. Conley’s carpenter shop was located on the west end of lot 3, facing N. College. 210 N. College. Conley was a local building contractor and was involved in building many houses as well as the high school on Meldrum.

“Fix Your Minds on These Facts. It is now settled that the new depot is to be constructed on the north half of block 6, being the block in which the grout stables are now located. The natural tendency of business in the old town has been and now is west from its present location; the business of the new town is tending to the north, and must naturally center in block 14, where the business of the old town meets it. From the new depot to the business of either point, block 14 must be passed; three propositions, which cannot be disputed, result in block 14 being the very center of business of Fort Collins. The lots in this block are now for sale by L. R. Rhodes or Jesse Harris. The above is an advertisement, founded on facts. Block 14 is the block south of the grout livery stable, being the Mason property.” (Fort Collins Courier, November 17, 1881)

“There is talk now of securing the triangular tract of land bounded by Jefferson street, College avenue and Pine street, for a site for a county court house. Rather too near the business centre of the town. The site already owned by the county, in our opinion would be better.” (The Weekly Express, 19 January 1882)

“A REGULAR MARKET DAY.
GROUNDS SECURED AND BUILDINGS TO BE ERECTED.
The Committee on Advertising, Immigration and Statistics Set to Work.
On Wednesday afternoon the Board of Trade held its regular weekly meeting at the city hall and was fairly well attended. President Evans occupied the chair and opened the meeting. … The committee on market days presented their reports and stated that they had made an investigation and looked over the city with the view of finding a suitable location for the erection of buildings and coral that would be necessary to carry out the objects of such a day. The committee consists of C. J. Murray, S. H. Sickener, C. W. Ramer, G. W. Emigh and T. W. Valentine. Out of the numerous pieces of ground they had looked over they considered that bounded by College avenue Pine and Jefferson streets the most suitable. It is the three-cornered block opposite Rogers & Williams stable, which was lately fenced in. It is the property of Mrs. Mason, and that lady, when written to by the chairman of the committee, kindly offered to let the Board have the use of the ground for a term of five years if they paid the taxes. The report when put before the Board received their hearty approval, and was accepted by an unanimous vote. The committee was instructed to take out a lease on those terms and to get plans and specifications of the necessary building, corralls, sheds and yards necessary for market day uses.” (The Fort Collins Express, 1 May 1886) 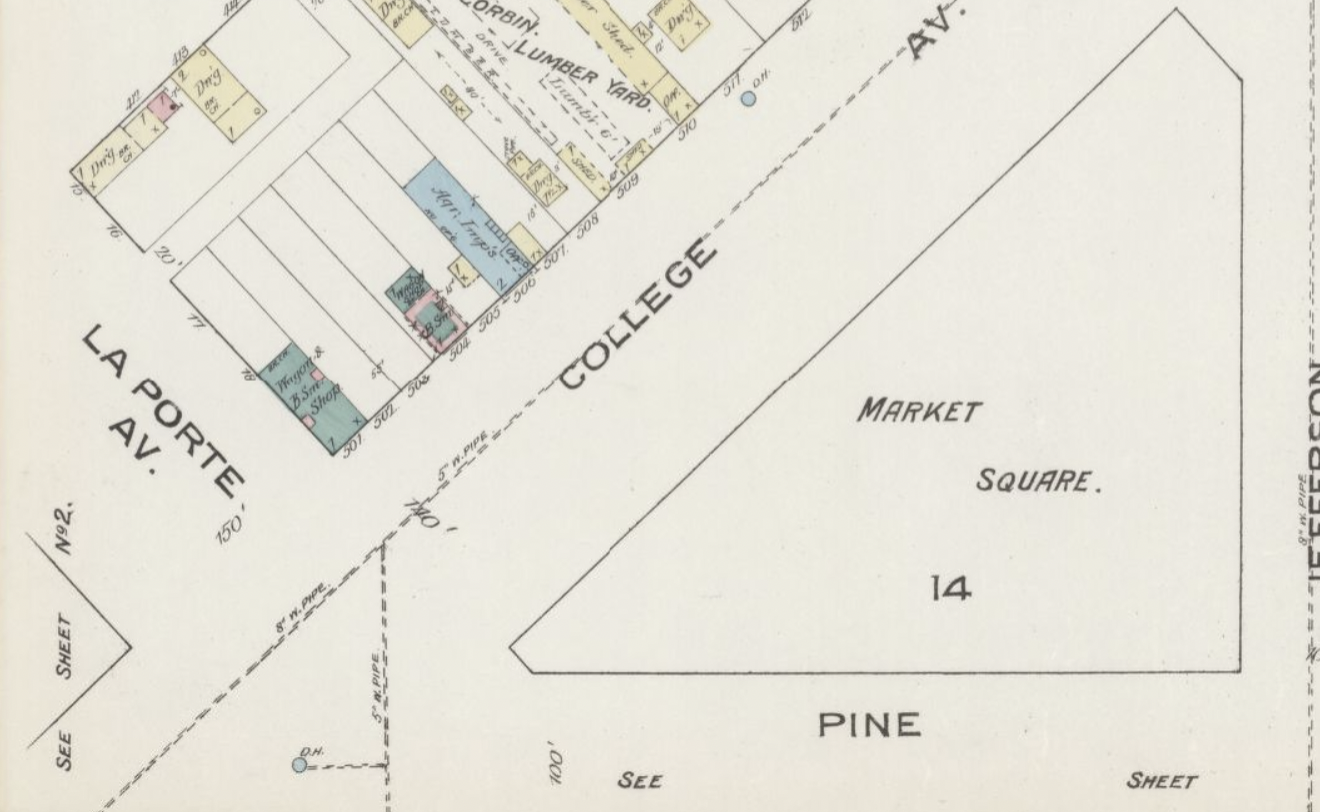 The 1886 Sanborn Map shows that the block was being used as the market square. 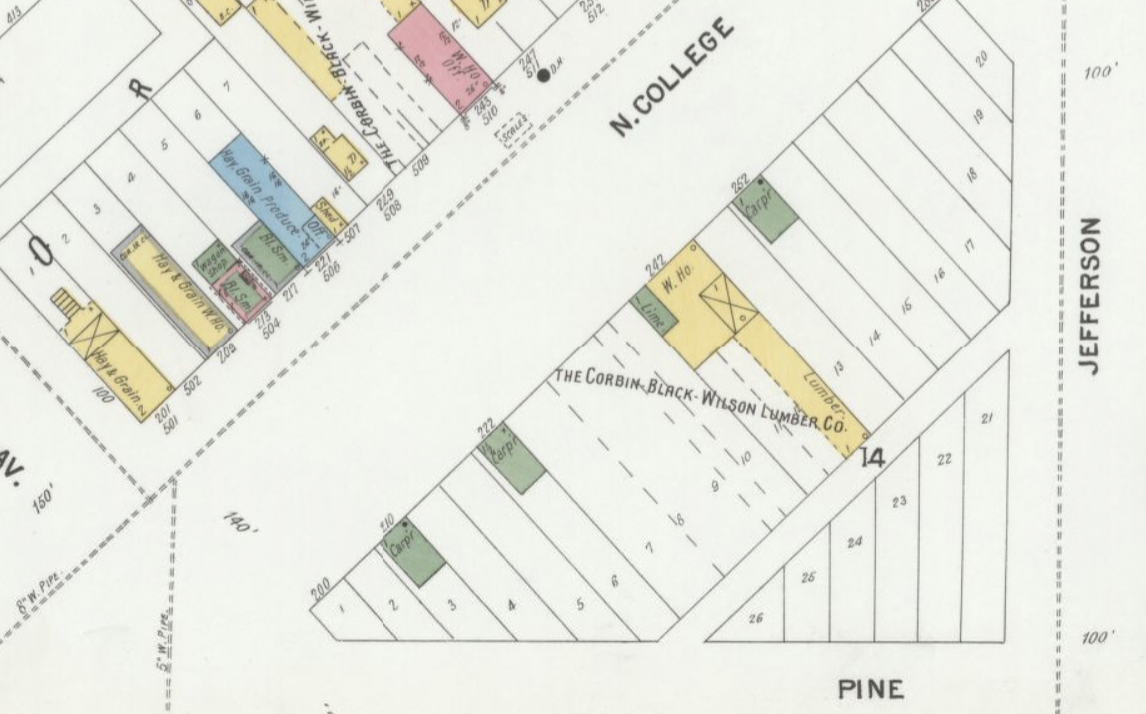 The 1901 Sanborn map shows a small carpenter’s shop on lot 3.

“F. B. Finley has rented the building formerly occupied by M. G. Conley on North College avenue, and is having it refitted for his taxidermy work.” (The Weekly Courier, December 3, 1902) M. G. Conley was a well known carpenter that had a shop on lot 3, block 14. He built many houses. He was also the contractor in charge of building the new high school on Meldrum at Magnolia. (The Weekly Courier, November 1, 1900)

“F. B. Finley, who owns the lot, 25×100, extending from College avenue to Pine street, adjoining Aiken’s livery barn, will soon build a brick building thereon two stories high with a basement.” (The Weekly Courier, January 7, 1903) [Aiken’s livery barn would have been on lots 1 and 2, probably of wood.]

“F. B. Finlev. the expert taxidermist of Fort Collins, was in Loveland Sunday Mr Finley is doing a great business in his line. He has recently put in a $500 tanning plant, and is equipped to handle the large number of orders he is receiving. F. W. Flanigan is his Loveland agent.” (The Loveland Register, Volume IX, Number 20, May 14, 1903) [This doesn’t sound like the 2-story brick edifice previously mentioned.]

B. F. Finley discovered a process for precipitating gold from solution (Weekly Courier, July 15, 1903). He started advertising shares for sale in the Finley-Orr Gold Saving Process. (Orr was his partner in developing the process.) By 1904, Finley’s business is listed as being at 152 N. College. But in the May 11, 1904 Weely Courier Finley has an ad to sell off a gas engine that he had been using in his tanning process. And in the July 6, 1904 Weekly Courier, the paper announced that he was heading to the Pacific Coast to introduce his patent placer mining machine. That was the last mention of the man in local papers. There’s no mention of his selling lot 3, block 14. But based on a later sale, it’s most likely that he sold to W. E. Aiken who held the other lots.

“T. H. B. Bell and T. K. Bell of Carthage, Missouri, have bought the city corral and feed store and will carry on a sale and feed business. Mr. Bell brings with him from Missouri some line work mules; also a bunch of nice saddle and driving horses.” (The Weekly Courier, November 15, 1905) [Not positive this is Lots 1-3 on Block 14, but I’m going to tuck it in here just in case.] 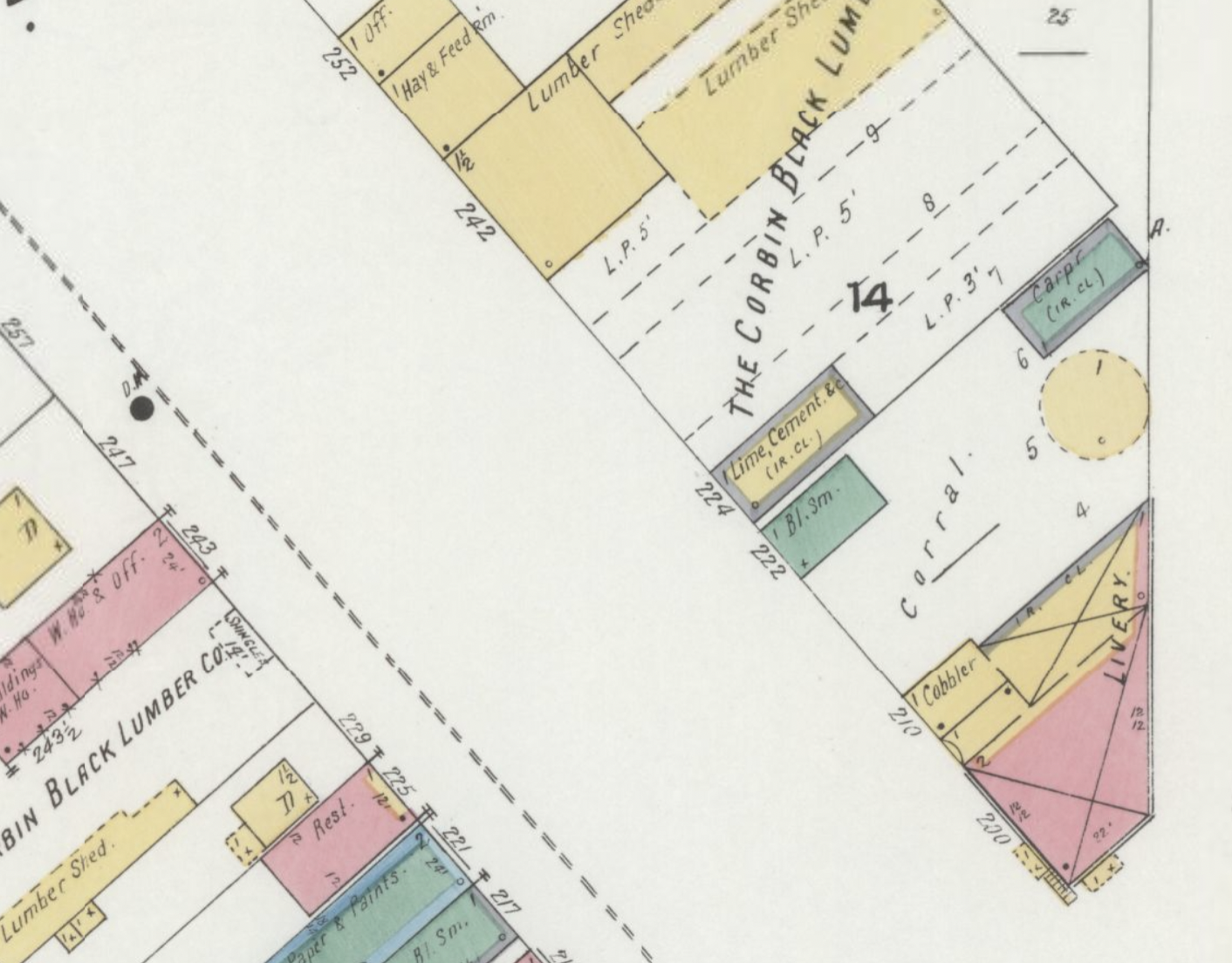 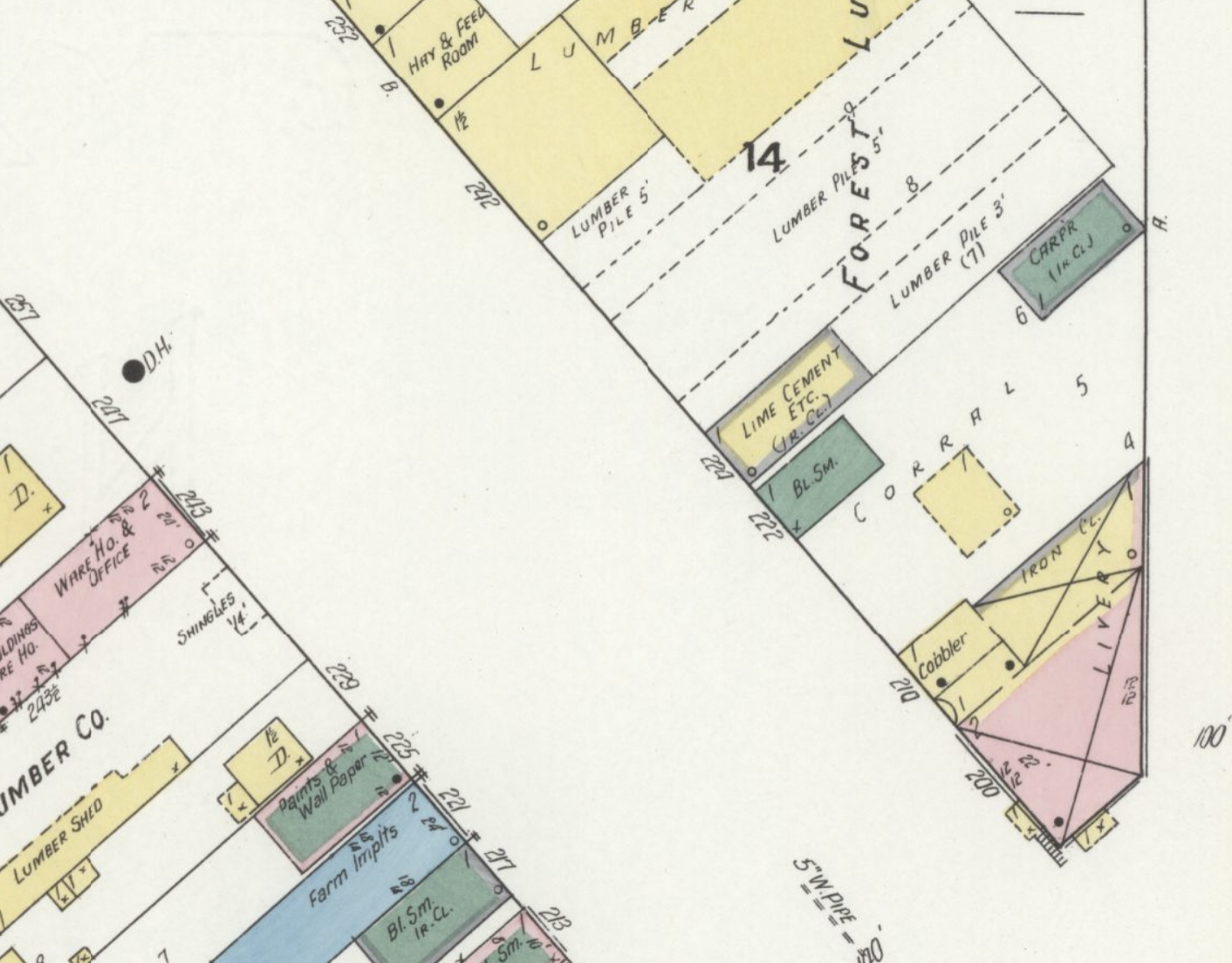 “E. D. Bullard is now sole owner of the Bell livery barn and equipments having purchased J. Stafford’s interest. This is one of the best liveries in town and the proprietor is an obliging and accommodating gentleman. His many friends wish him success.” (Fort Collins Courier, February 12, 1908)

“On Thursday, Thos. H. Robertson sold the Bell livery barn and the lot it stands on to Abner Bullard and T. K. Bell for $15,000. This is one of the best business corners in the down town section.” (Fort Collins Courier, April 1, 1908)

“Abner Bullard, proprietor of the Bell livery, has bounded into the millionaire club with a brand new Stanley steamer, of which he is very proud.” (The Weekly Courier, July 28, 1909) 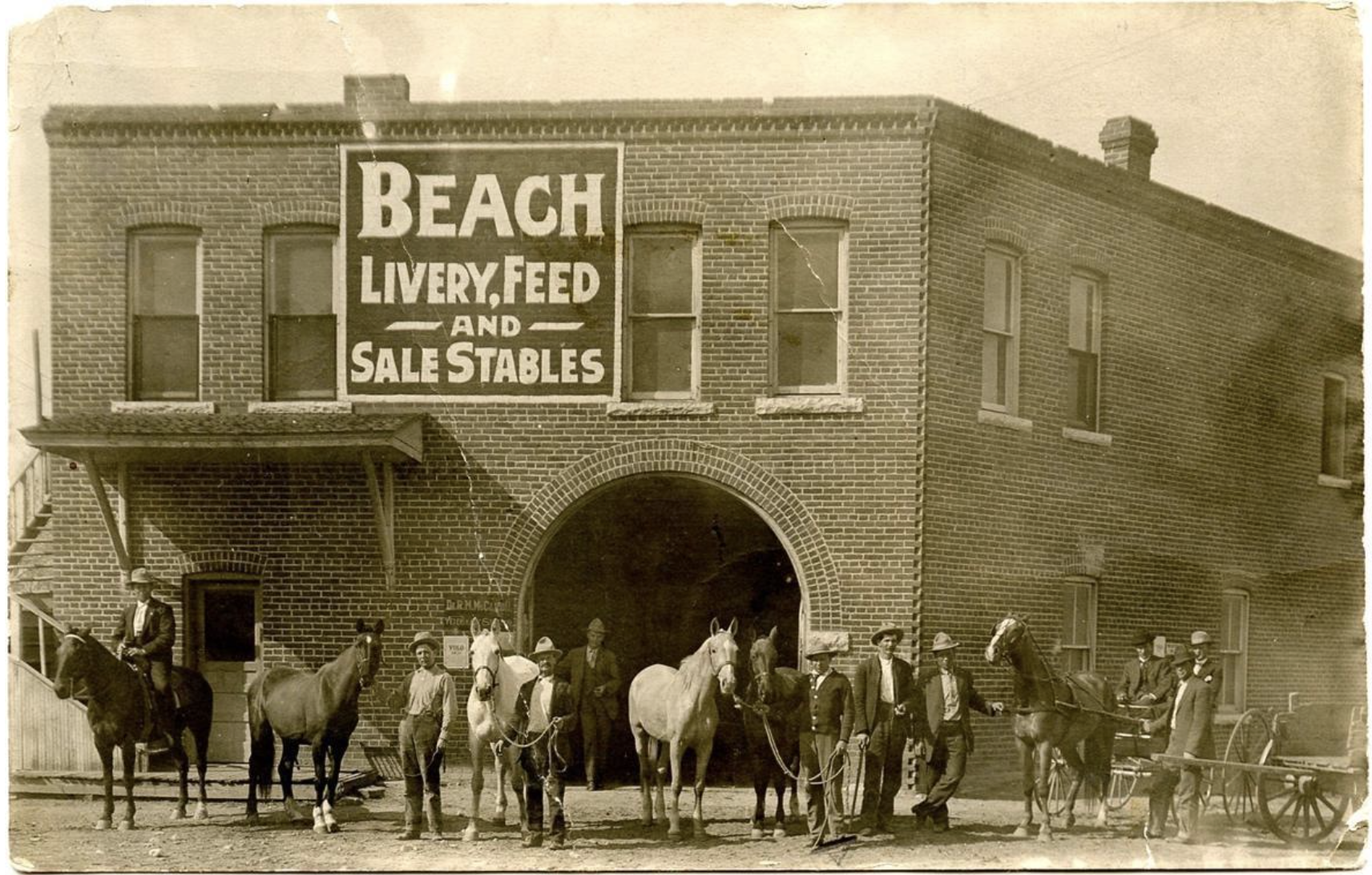 Beach Livery, 1910. (From the collection of Malcolm McNeill.) 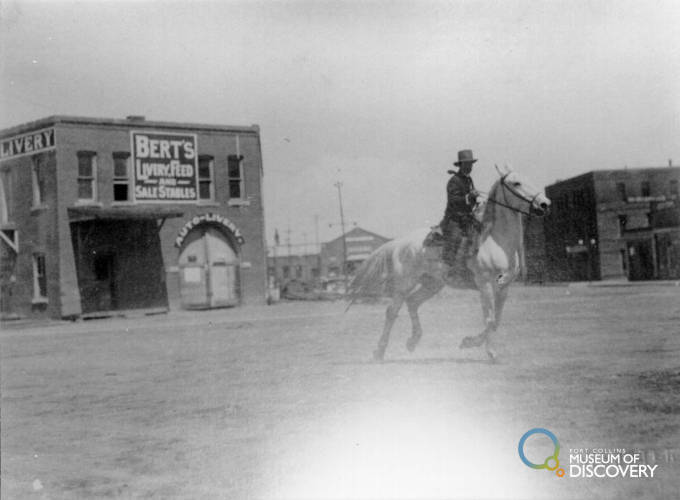 “T. K. Bell, who sold his livery business to Hub Beach and Ellery Nutter left Saturday morning for Imperial, California, where they will probably locate.” (The Fort Collins Express, January 27, 1910)

“With the arrest of ‘Hub’ Beach and Harley Welsh at La Junta on Tuesday borning [sic] there has come to light the story of a wild hunt for fugitives through the hills west of Ft. Collins on Sunday by Sheriff Carlton and Deputy Pindell.” (The Fort Collins Express, February 24, 1910) [The boys apparently had relations with some gals. They were taken to jail then released on bond. There were negotiations in which marriages were attempted to be arranged, but in the end, the boys pled guilty.]

“All the property of the Beach Livery company was placed under the hammer today, including sixteen horses and all the vehicles and harness. A large crowd was present at the auction and some of the articles were sold at a ridiculously low figure, but nothing was withheld. The auction was held in front of the barn at the corner of Laporte and College avenues.” (The Weekly Courier, November 17, 1910) [This could be the College/Walnut/Pine property that is the subject of this page. But it could also refer to the livery located on the northwest corner of College and Laporte, where a livery was also located.]

Hub got in trouble with the law when he and Harley Welsh bespoiled a couple of gals in La Junta. The boys hid out in the foothills west of Fort Collins and were hunted down through the snow by the sheriff. (The Fort Collins Epress, February 24, 1910) This may have distracted the young (24 year old) Beach from focusing on his new business venture. 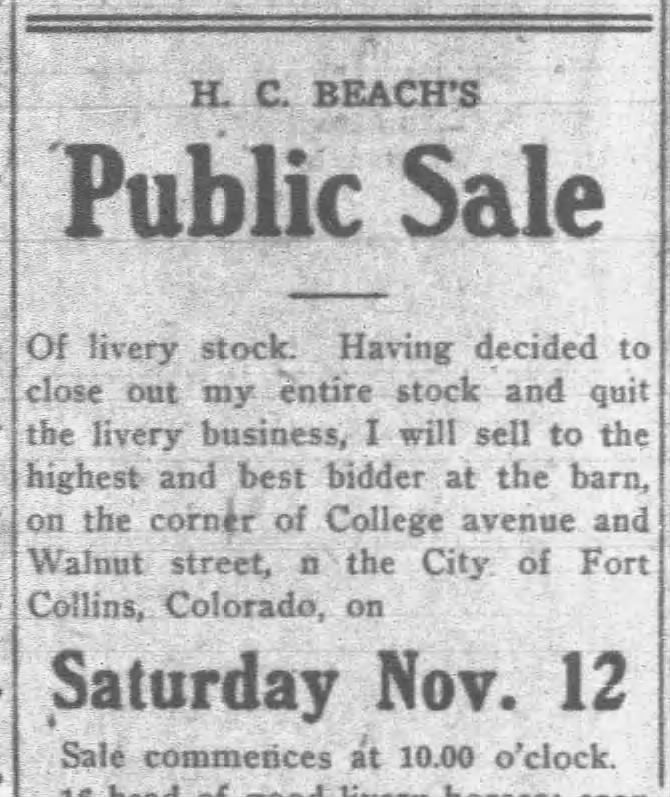 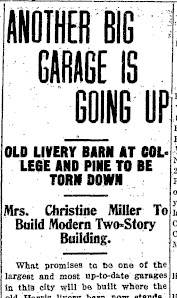 “ANOTHER BIG GARAGE IS GOING UP
OLD LIVERY BARN AT COLLEGE AND PINE TO BE TORN DOWN
Mrs. Christine Miller To Build Modern Two-Story Building.
What promises to be one of the largest and most up-to-date garages in this city will be built where the old Harris livery barn now stands. It is being torn down; that is that part of it which will not be saved for the new building. The twelve-inch brick walls will remain standing and will be joined on the north by the party wall between that property and the Douglas property. A long incline will be constructed on the east side of the interior of the building for the passage of cars up to the second floor. The main repair and paint shops will be installed there and the lower floor used for the storage of cars and for short service necessities. The main entrance to the south will be left and fixed so that cars may come in that door, get their supplies, oil, gas etc., and go on out the west door. All the partitions are being torn down and a brick wall will be constructed thru the center of the room, running east and west with one large door in the center, directly opposite the south entrance. This will lead to the storage room to the rear. Several local concerns are figuring with Frank Miller, who is handling the proposition for his mother, but none of them have, as yet, agreed to any definite settlement. The incline passage to the repair shops is to be a strictly modern arrangement. It will be so grooved that a car cannot possibly run astray while descending. A derrick will be installed at the top to hoist any cars which cannot come up the grade of 8 per cent under their own power. The two front rooms upstairs will be fixed up as paint rooms. Several cars may be cared for at one time. The floors upstairs will be thoroly reinforced with large trusses, so that they will carry any load which may be put upon them. The floors are to be recovered and put in the best of condition. Windows will be placed in numbers, both upstairs and down, so that light will not be lacking. The total floor space to be covered by the two floors will bo approximately 10,000 square feet There will be a 75 feet front on College, 100 feet on Pine and 32 feet on 1 Walnut. The sidewalks are very seldom used in front of this building and danger to the public from, passing cars will not be very great as a result.” (The Weekly Courier, April 7, 1916)

“Permission was granted [by the city commissioners to the] Hall Brothers for the installation of a pipe line connecting their gasoline tank with the Northern garage which is to supply them with gasoline. The city attorney will draw up the specifications.” (The Weekly Courier, September 6, 1918) 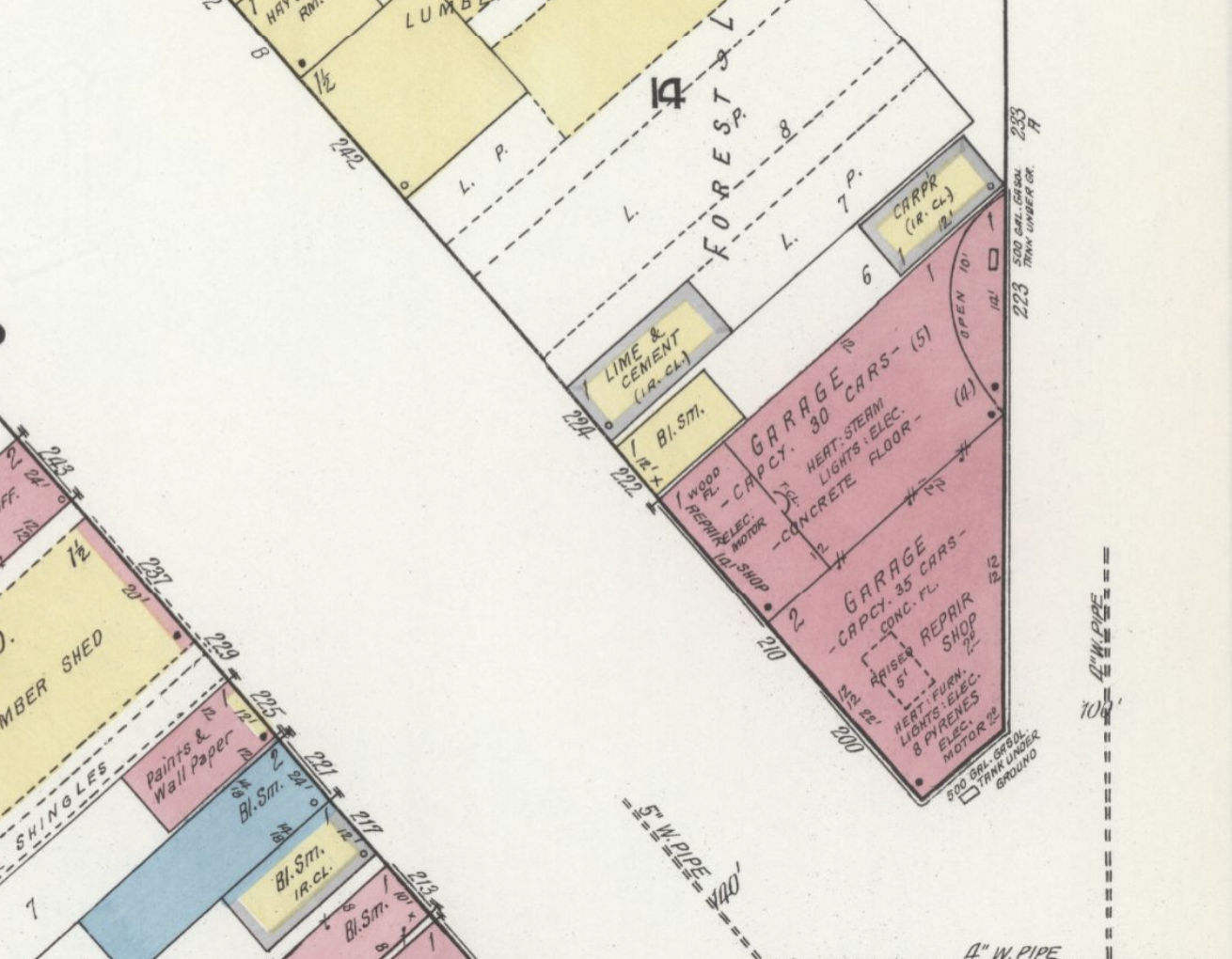 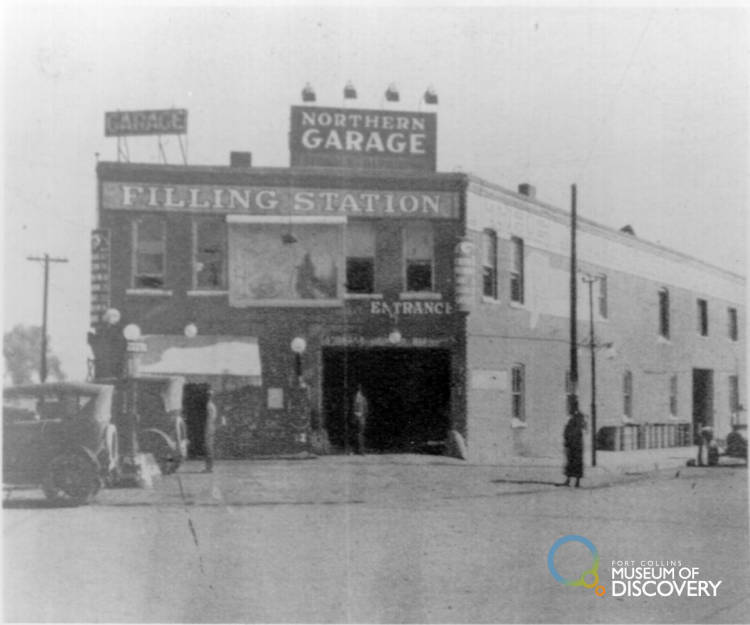 The Northern Garage. Photo from the FCMoD Archive, H09011.