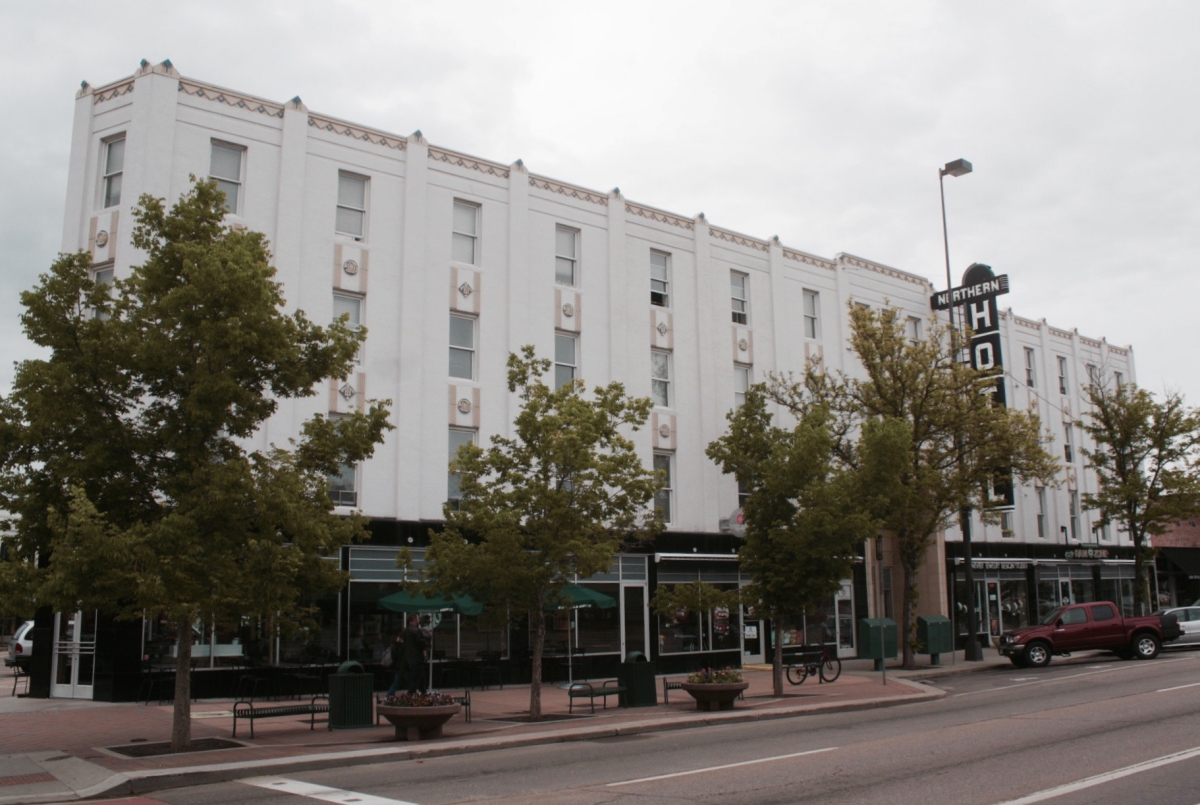 I need to find a photo that shows mostly street.

Talk about paving College Avenue from Laporte to Oak (two blocks), the three intersections at Laporte, Mountain and Oak, and the one block from College to the passenger Depot along Laporte. The plan was to first lay gas and sewer lines. Road paving would either be done by the city or an outside contractor, but the businesses along the street would have to cover the costs. The street and intersections would be paved with concrete. (The Weekly Courier, July 2, 1915)

“D. & I. TO BUILD NEW LOOP BUT REMOVE DOWNTOWN TRACKAGE COUNCILMEN SAY THEY HAVE NO AUTHORITY AS PROPERTY OWNERS ENTER A VIGOROUS PROTEST AGAINST THE TAKING UP OF TRACKS IN FOUR BLOCKS
The Denver and Interurband electric line, owned by the Colorado & Southern, will remove the tracks on College avenue, from West Mountain avenue to Jefferson street and on Jefferson street from College to Linden street before the paving of College avenue is started . At the same time it will remove the two blocks of trackage on Remington street between Edwards and Elizabeth- and connect the track- at the intersection of Remington and Edwards with the Whedbee street line by extending; the track on Edwards three blocks east and two blocks south on Whedbee to the present terminus of the Whedbee street line at the corner of Whedbee and Elizabeth streets.” (The Weekly Courier, May 26, 1916)

“ONE STRETCH OF PAVEMENT FINISHED One stretch of the College avenue pavement has been completed. The last concrete was placed at the north side of Oak street this afternoon and the machine was moved to Walnut street at the Northern hotel. The contractors will start paving on east side of the street car tracks tomorrow morning and move south The paving of the block south of Oak street will not be started until the second strip is completed. When the center of the street is finished, the west side of College will be started.” (The Weekly Courier, August 11, 1916)

“The Western Union has its traveling construction crew here for the purpose of rebuilding the line on the Colorado & Southern between the depot and the college. This move is in anticipation of the completion of the surfacing of Mason street, the grading of which was started last fall.

The poles of the telegraph company will be placed on the west side of the street just inside of the curb line. Some of the poles have already been removed and the cable lines are temporarily suspended from the trees. The line was established in the center of the street alongside of the railroad tracks but will be moved to the curbing.” (The Weekly Courier, May 11, 1917)

There had been talk about changing the names of streets. No one could agree on a single plan. The only thing everyone did agree on was that street signs were needed. (The Weekly Courier, March 1, 1918)

“Fisher & Mikesell, the original contractors on the Mountain avenue, Linden, Walnut and Pine street concrete paving, and which was finally taken over by their bondsmen, asked for a special meeting of the city commissioners for Thursday evening, Sept. 5, at 7:30 o’clock for a final adjustment of all matters pertaining to that contract and the council when it adjourned agreed to meet at that time for that purpose.” (The Weekly Courier, 6 September 1918)